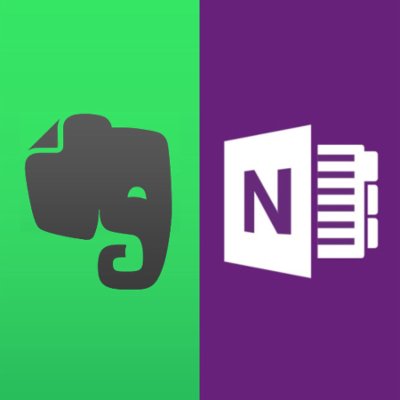 Tip of the Week: Is OneNote or Evernote Better for Your Needs?

The ability to take notes is invaluable to business, but the ability to take cohesive, well-organized notes is essential. Therefore, it is important to utilize a solution that enables you to do so. For this week’s tip, we’ll compare and contrast two note-taking applications — Microsoft OneNote and Evernote — to evaluate which will better serve your needs.

What OneNote Has To Offer
OneNote offers a fairly comprehensive suite of features to its user, offering a wider variety of tools than Evernote does. Depending on the platform you use, you can draw, record a quick audio or video clip, add images and spreadsheets, and share everything with other users — all in addition to the basic text-based note function.

The way it is set up, OneNote also enables the user to remain well-organized in a logical and sensible way, with the ability to create individual notebooks that are themselves able to be divided into sections and subsections, each divisible into pages. The many functions that OneNote allows are divided into a tabbed system similar to what can be found in the Office applications. This interface is most prominent in the Windows version, with similar (if less comprehensive) features in the Mac, iPad, iPhone, web, and Android versions.

OneNote’s major flaw lies in its web clipping function. When content is clipped from a webpage and added to OneNote, it is added as an image. As a result, links and videos and other similar content will not work, and you can’t copy and paste any content from the clipped webpage. It is also only available to users with a Microsoft account.

Finally, OneNote utilizes OneDrive to keep itself synced across all of your devices. Depending on what version of Office you use, your OneDrive storage space allotment will vary. There is also the option of purchasing additional storage space through various plans.

The Features of Evernote
Evernote offers the same basic functionality as OneNote, but there is still enough of a perceptible difference that the comparison between the two feels a little like comparing apples to oranges. While Evernote also allows the user to create notes and such from scratch, it has clear strengths in its capability to clip web content.

Rather than just taking a screenshot of the web page, Evernote provides a toolbar application that allows the user to capture content in a variety of different ways. A user can grab the article alone, without ads and extraneous content, or just the stripped-down text and graphics, sacrificing the original formatting. Evernote also accepts the full page, a working bookmark to that page, and yes, a screenshot of a particular page.

The clipper also allows you to add tags, as well as notes by adding text, highlighting what’s there, drawing on it or adding arrows, and more. Plus, the only element to a captured page that isn’t live and editable are things like videos. However, clicking on the video in Evernote will take you to the original page where it can be viewed.

Evernote shows some significant changes between its versions for Windows and Apple devices, making the Apple device versions a little trickier to navigate than the lists that the Windows version showcases. The web and mobile versions have a shortcuts feature that enables the user to save a quick link to a particular note in a special favorites menu.

Evernote comes in a limited, trimmed-down free version, as well as in various subscription models for differing price points and data caps.

Why Not Both?
Clearly, both OneNote and Evernote have their specific strengths, which translate into improved capabilities for certain tasks. As a result, it may best suit your needs to have a version of each, which is made easier if you only require the free version of one or the other. You may want to use Evernote to compile research for a given project, and OneNote to map out the project and take notes for reference.

One thing to keep in mind, although both systems are relatively secure, business owners will want to make sure employees aren’t storing sensitive company information on their own personal OneNote or Evernote accounts. Both services offer business/enterprise versions that let you manage and control your data.

Whichever approach you take, COMPANYNAME is here to help. Call us at PHONENUMBER for more information, and be sure to subscribe to this blog for more tips every week!