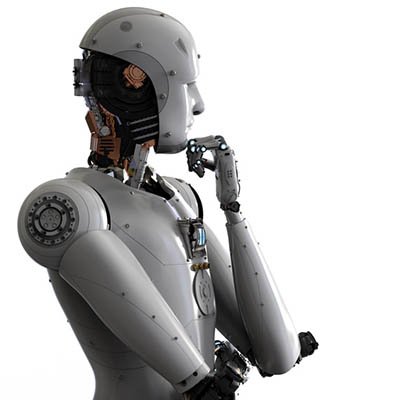 How Does the A.I. in Reality Measure Up to Hollywood’s?

Figuring out how to utilize platforms that depend on machine learning to boost an organization’s bottom line is one of the biggest puzzles for every modern business owner. After all, seemingly every new technology concept can be leveraged into enhanced profitability if it is rolled out right. In this case, many organizations have found ways to use human-created machines to learn how to do tasks that would be deemed too expensive if humans were to do them.

Over the years, A.I. has been a frequent topic of discussion, and one that fiction authors (especially those in science-fiction) have used for all types of stories. In Hollywood, the artificially intelligent character has been around for a long time, a lot longer than the A.I. businesses are using to enhance their profitability. Today, we are going to look at how A.I. is portrayed in media and how it differs from the reality of modern A.I.

The Start of A.I. in Reality
In 1956, 30-some scientists met at the Hanover Inn on the campus of Dartmouth College in New Hampshire to discuss a “strange new discipline”. The talks were about how to build a machine that could think and went on for weeks. What came to be known as the “Dartmouth workshop” founded a quest for A.I. The discipline almost died off several times, but if you look at the world we live in today, it’d be hard to consider that. These days it seems like every business is using some sort of software platform that features what those at Dartmouth a half-a-century ago could only dream about. Machine learning has seen major innovations in many different industries, and we are closer than ever to deep learning–the innovation needed in machine learning to create machines that think like we do.

The Start of A.I. in Hollywood
In Hollywood, however, deep learning is a thing of the past. Machine sentience is commonplace and stories of A.I. are typically approached as commentary about the tyranny and hubris of human beings. A.I. works for so many different types of story arcs as setting an A.I. up as the hero works, setting them up as the victim works, and setting them up as a villain works. In fact, since humans haven’t mastered the technology, writers do what they do best: use creative license to create A.I. characters that are more like humans than machines. The first robot A.I. was Robby the Robot in 1956’s Forbidden Planet, but 1931’s Frankenstein was the first time an artificial being was brought to life on the big screen. A.I. is often used as a plot device for entertainment’s sake, or as commentary, but media hasn’t been able to completely represent where we are at with the technology today because, thus far, A.I has been created to help humans solve problems, not to actually have artificial consciousness. Here are a few movies that represent different uses of A.I. and how they stack up against modern A.I.:

2001: A Space Odyssey (1968)
Directed by: Stanley Kubrick.
Written by: Stanley Kubrick and Arthur C. Clarke.
Starring: Keir Dullea, Gary Lockwood, Williams Sylvester.
Summary: The sudden appearance of a giant black monolith acts as a portal through time, transporting the view from prehistoric Earth to a future where space exploration is commonplace. On a manned trip to Jupiter, two astronauts are tricked by a crafty mission computer, a HAL 9000 series that claims to be “foolproof and incapable of error.” One of the astronauts is killed by HAL, while the other one risks everything to inflict retribution.
How the A.I. stacks up to modern A.I.: The HAL 9000 is a pretty decent representation of what a future A.I. system is going to be used for. The decision to kill the crew, and its subsequent pleading toward the end of the film show situations in which HAL was more like a malevolent human than as a sentient machine. Today’s A.I. is all about using data to solve organizational problems, but “feelings” is not in the equation at this time.

Blade Runner (1982)
Directed by: Ridley Scott.
Written by: Hampton Fancher and David Webb Peoples from a novel “Do Androids Dream of Electric Sheep?” by Philip K. Dick.
Starring: Harrison Ford, Rutger Hauer, Sean Young, Edward James Olmos, Daryl Hannah.
Summary: Blade Runner is set in 2019 Los Angeles and features former police officer, Rick Deckard (Ford) who works as a Blade Runner, someone who hunts down and retires replicants–artificial beings who seem as human as the humans themselves. In the course of action, it’s hard to determine who is in the right, as the lines are completely blurred between replicants and the people tasked with killing them.

How the A.I. stacks up to modern A.I.: The replicants in Blade Runner were man-made men (and women). From their appearance to the fact that they implanted human-esque memories in the machines told a story about how dangerous it can be when people try to play God. So, while it makes for great cinema, the replicants being indistinguishable from their human counterparts is questionable. There hasn’t been any technology developed to make machines more human, they have to be told to try to do things the way humans do in order to learn as humans do, making the whole premise impossible to implement with today’s limited A.I. technology. However, Google’s most recent new development, called Google Duplex, will allow Google Assistant to make phone calls for you. For example, if you ask Google Assistant to make a haircut appointment for you, it will call your salon, as if it were a person, and negotiate a time to fit your schedule. The results are both really cool, and a little creepy, but in the end, if Duplex can save you a few minutes here or there and not make business think they are getting fake auto calls, we’re all for it.

WarGames (1983)
Directed by: John Badham.
Written by: Lawrence Lasker, Walter F. Parkes.
Starring: Matthew Broderick, Ally Sheedy, John Wood, Dabney Coleman.
Summary: David, a hacker a decade before hacking became commonplace, breaks into NORAD and programs the WOPR, a military strategy computer, to play out war games until it has launch codes and launches hydrogen-bomb-tipped missiles at the Soviet Union. After finding the key to disarm the missiles, David and his friend Jennifer (Sheedy) track down the system’s creator to help keep the U.S. from launching Global Thermonuclear war.
How the A.I. stacks up to modern A.I.: WarGames examines the nature of a machine learning computer and how its role could be critical for the sustainability of the human race. The answer, as hokey as it is, to keeping the WOPR (also called Joshua after the developer’s dead son) from launching missiles is Tic-Tac-Toe. The WOPR learns that nuclear war and tic-tac-toe are pointless. That is the kind of fundamental application that modern A.I. could work out, and while we don’t suppose the U.S. military is looking to integrate A.I. to our national missile defense, the A.I. of WarGames was a pretty good representation of how A.I. could learn what are typically very human lessons.

Her (2013)
Directed by: Spike Jonze.
Written by: Spike Jonze.
Starring: Joaquin Phoenix, Amy Adams, Scarlett Johansson, Rooney Mara, Olivia Wilde.
Summary: Set in the very near future, recently divorced writer, Theodore Twombly (Phoenix) purchases a companion bot named Samantha (Johansson). She is an A.I. assistant but is exactly what Twombly needs and ends up falling in love with it. As their relationship develops, he becomes happier, then stagnates and is forced to break it off when Samantha describes how she can be in love with thousands of people simultaneously. How the A.I. stacks up to modern A.I.: The movie Her provides a fair amount of foresight to where the virtual assistant program is going. If you spend any time thinking about the future of technology it becomes evident that the more engaged you can get with your virtual assistant, the better it will work for you. Samantha has a superior understanding of language, fluidity to “her” voice, reasoning, planning, and most importantly for our purposes, obvious learning capabilities. The fluctuations in its emotional state don’t do the representation of the A.I. justice, but all-in-all Her is an interesting character study about how artificial intelligence could be designed to treat humans down the road.

Ex Machina (2014)
Directed by: Alex Garland.
Written by: Alex Garland.
Starring: Domhnall Gleeson, Oscar Isaac, Alicia Vikander.
Summary: A billionaire, Nathan Bateman (Isaac), fixes a contest to get one of his employees, Caleb (Gleeson) to come to his remote laboratory to take part in a Turing test of a new A.I. that he’s developed. The A.I. is kept in a humanoid android named Ava (Vikander). When she convinces Caleb she is being tortured, and he finds out Bateman’s dirty little secret, he tries to help Ava bust out, only to be duped and left for dead after Ava kills Nathan. She escapes alone on a helicopter.
How the A.I. stacks up to modern A.I.: First, I’ll say that this is one of the coolest of the A.I.-based movies because there is a sense of mystery, much like that inherent with A.I. The solitary genius theory is one of the most used when it comes to A.I. movies (or monster movies) and while the A.I. itself showed well, there is no way that a single person, even one with unlimited resources, could create a functioning A.I. automaton. As far as the deep learning capabilities, the Ava android is what we both aspire to and hope to avoid–which is kind of a good metaphor for the discipline as a whole.

There are dozens of movies with artificially intelligent characters. With people building new A.I.’s every day, the way they are used in reality remains to be seen. In movies, however, they will continue to astound and thrill. Here are some other titles that feature A.I.:

Do you have a favorite A.I.-fueled film or television show? Are you of the opinion that the A.I. systems we can interact with are close? Are they necessary? Leave your thoughts in the comments below.